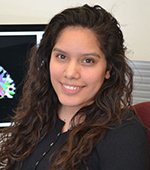 Esther Palacios-Barrios, a graduate student in the Department of Psychology who also works in the Hanson Lab at LRDC, was featured in the July 15 Pittwire Accolades for her acceptance into the 2019 Ford Foundation Fellowship Program.